We’re a leading marketplace platform for learning and teaching online. Explore some of our most popular content and learn something new.
Total 1 Results 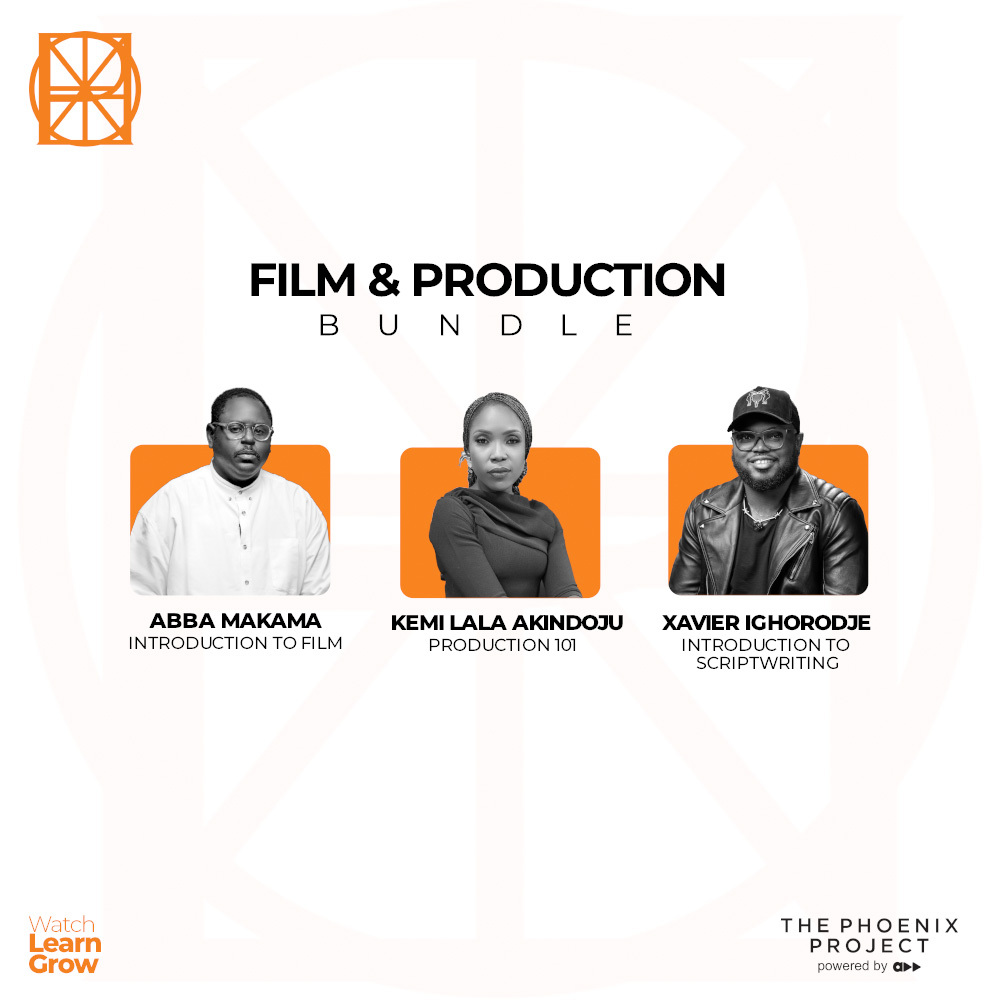 The Superstar Facilitators On The Film and Production Bundle

Our course bundle showcase for this month’s edition is the Film and Production BundleBelow are some of our facilitators for the Film and Production Bundle and the course facilitated by them.Kemi Lala Akindoju:Kemi"Lala" Akindoju is a Nigerian actress and CEO at The Make It Happen Productions, one of Nigeria’s young and dynamic production companies responsible for the much talked about stage plays ‘The V Monologues: The Nigerian Story (2011 & 2012) and ‘The Wives’ (2014).She won an Africa Magic trailblazer award for her role in the film adaptation of Dazzling Mirage.Here on the Phoenix project, Kemi takes on the course, Introduction to Film production.Kemi is well-grounded in production systems and processes and it jumps right at you from the start. This course was specifically designed by Lala, and we’re calling it pure gold.Xavier Ighorodje:Mr. Xavier Ighorodje is an award-winning screenwriter, director, content creator, and producer resident in Nigeria. He is the screenwriter of the short documentary, A WILL OF IRON which won a SUNDANCE award for the short documentary in 2014, sponsored by the Bill and Melinda Gates Foundation.His short film – The truth about B.A.E, also won the best cinematography, best writing, and best directing in the Lagos 48-hr film challenge in 2015. He is the Head Writer for the MNET Africa Magic Showcase’s 260 episodes hit Telenovela series ENAKHE.Here on the Phoenix Project, Xavier takes the course, Introduction to ScriptWriting.With this course, Xavier weaves together an immersive story that takes you, learners, on a journey into creating the perfect script when writing for screen.Abba Makama: Abba T. Makama is the creative director and founder of Osiris Film & Entertainment based in Lagos, Nigeria.Abba has directed documentaries for TV Networks like Al Jazeera and has created content for local and international brands like Google, BlackBerry, Hennessy, and Ciroc Vodka.Abba is the director of the award-winning - Green White Green- one of the most traveled films in Nigerian film history. Green White Green can also be found in a few University libraries around the world, including Harvard.Abba takes the course, Introduction to film on the Phoenix Project.For every aspiring filmmaker, Abba unpacks the tapes that detail everything that you need to know about your immediate journey to becoming a filmmaker. Can you hear it? #Action!To enjoy the insightful knowledge that these facilitators have unpacked on film and production you can sign up on our website, to enroll for these courses.

Inside The Phoenix Project

5
Here., we give you every information you need to know about The Phoenix Project.

3
Where we inform our readers

2
Where we celebrate Phoenix Stars

FIVE REASONS WHY YOU SHOULD ENGAGE THE RIGHT WAY ON SOCIAL MEDIA AS A CREATIVE.

1. IT HELPS YOU REACH A LARGER AUDIENCE:Being able to reach a large number of people is the greatest flex and that is what social media gives you if you engage the right way. With this, it gives you a chance to reach out to more people at the same time and increase your brand awareness among them. People will view your posts if you post regularly, which can greatly improve your social media engagement and brand positioning. 2. IT ALLOWS PEOPLE TO TRUST YOUR BRAND:  As a business owner, your customers need to trust your brand, as this helps your business grow  and also gives room for people to tell other people about your brand(word of mouth). This can be possible by having an active social media presence and knowing the right way to engage.3. YOU UNDERSTAND YOUR CUSTOMER’S PREFERENCES BETTER:Knowing the type of products or services your audience use or need is a very big deal and sometimes seems impossible, but engaging the right way on social media allows you to understand the different ways to know what your audience wants.4. SOCIAL MEDIA PRESENCE HELPS BUILD VALUABLE RELATIONSHIPS WITH CUSTOMERS: Customer relation is key and almost as vital as the business itself because without the audience there’s no business. Having valuable relationships is not only possible in person but social media can take you to every customer’s doorstep, it sounds impossible but that's the power of social media engagement.5. YOU GET TO KNOW YOUR COMPETITORS:What are your competitive advantages and who are your competitors?Knowing your competition and being able to tell their strengths and weaknesses is necessary, we all want that edge over the competition don’t we? Well, look no further all you need to know is that with a strong social media presence this is achievable.Social media has great power and it definitely is one of the strongest means of communicating, but it is one thing to have a social media presence and it is another to know how to engage properly on social media. To get more insights on the reasons you need to engage the right way on social media as a creative, you can sign up for Social Media for Business Course Bundle on www.phoenixprojectng.com

The Phoenix Project Incubation program is delivered in partnership with Nest Innovation Technology Park. The program  is focused on building creative talents  into successful creative business leaders that can turn their ideas into sustainable businesses. We are working with the participants to learn, build and manage their businesses through the following - Expert-led business training sessions - Business Advisory  - Access to Market - Investment Ready Business Leaders The incubation phase commenced on the 2nd of September, 2022 where we hosted both Lagos-based and out-of-state participants for their orientation program. The event had Edward Israel, CEO of Capre Diem Solutions and former PR and Communication manager for Chocolate City Music as the guest speaker who spoke passionately and opened the participants' eyes about opportunities in the creative sector and how they can make the most of it. He further shared thoughts, lessons, and feedback for the learners as they embarked on this immersive incubation. In the first 6 weeks of the incubation, the participants had a deep dive into elements of Business Strategy, Design Thinking, Finance, Business Operations and Team management, Business Development & Sales/Marketing, and Public relations. With these courses, participants have been able to understand the concepts and principles of each of these elements, particularly how it affects their businesses. Participants also had hands-on practicability in modeling for their businesses, ideas, and ventures.In the coming weeks, participants will go through sessions on Legal, Governance, and finally on Art of Pitching.10 participants will make it to the Phoenix Pitch Night where they will pitch their creative business ideas and the 5 of them will receive support funding for their creative business.

Q1.Tell us how you got to know about The Phoenix Project and why you registered.I learned about The Phoenix Project through an ad I saw on Instagram. I decided to register because I saw it as a platform to learn about visual storytelling and filmmaking techniques which I am passionate about. Q2.In a few words describe your journey so far with The Phoenix Project. It has been a jolly ride. I count it as a privilege. Q3.Could you please tell us a bit about the organization you’re interning with? Mr.Macaroni Entertainment Company is a brand that provides the content to keep everyone entertained, whether you prefer to read, watch or listen.  Mr Macaroni's Online TV Platform for premium Entertainment Experience; Drama, Comedy, Vox Pop, Celebrity Interviews, Games and more fantabulous content. Mr. Macaroni TV is founded by Adebowale "Debo" Adedayo known by his stage name Mr Macaroni, is a Nigerian actor, content creator and citizen activist. Mr. Debo is  a trained thespian, his popularity  grew from his comic skits on social media, where he plays the role of a political figure cum sugar daddy called "Daddy Wa" or a sadistic lecturer called "Professor Hard Life. Using his satirical works and online presence, Debo is also known for his social justice advocacy.[7] His skits satirize social issues to promote human rights and critique everyday social interactions. During the 2020 #EndSARS protests in Nigeria, Debo used his platform and presence at various protest venues to advocate against police brutality - even after becoming a victim as a result.  Q4.How impactful has it been for you working with this organization? It has been an eye-opening experience, I am being exposed to how the art and entertainment industry works. Q5.Do you think this has taken a turn on your career path? Yes, of course! I will apply the lessons learned as I journey on my career path in years to come. My career vision is to become a foremost producer. Working with Mr. Macaroni TV is helping me gain relevant practical experience needed to bring my vision to reality. Mr. Macaroni TV has a  very supportive and collaborative environment. It can only get better from here.     Q6. Do you think this is a great opportunity for creatives?  Yes, this is a great opportunity for creatives.  Most budding creatives mostly do not live out their vision largely because they do not gain practical experience from a very early stage in their career. Internship opportunities like this help you to also build relationships that will help you going forward. Internship, just like the apprenticeship system, is a very good opportunity for transfer of knowledge from experts to their proteges. This is exactly what I am benefiting interning with Mr. Macaroni TV.

How would you rate this course overall?